This recipe for gluten free baked apple cider donuts is super easy, beyond delicious, and is ready in under 30 minutes! This how to guide will show you step by step how to make this perfect seasonal treat.

I had never heard of baked apple cider donuts before living in the US. I grew up with crazy accessibility to donuts or doughnuts (thank you Tim Hortons). I remember one of my neighbors mentioned them to me and I thought “I love apple cider but it is damn near impossible to find gluten free donuts”. The quest to create an apple cider donut recipe began.

Typically when we think of donuts, we think of the fried donut that has that shiny glaze on top. These are not those type of donuts. The beauty of the apple cider donut is that by baking it, you are not missing out on anything, I think the opposite. You are allowing the donut to be more cake like, a bit dense, and just packed full of flavor (without all of the mess).

What about using an air fryer?

Again, just bake them. It is less mess, less fuss, and the results are super delicious.

What is the origin of apple cider donuts?

Apple Cider Donuts enter the mainstream donut world in the 1950s. They were first introduced by the Doughnut Corporation of America. The DCA was founded by a Russian immigrant named Adolph Levitt in the 1920s. Apple Cider Donuts were considered a seasonal treat initially (as the cider would be readily available in the Fall) however now with our grocery stores and cider being easily accessible all year long, they no longer have to remain a Fall treat! You can enjoy them all year round.

Can you use apple juice instead of apple cider for donuts? Are they healthy?

Traditionally, you would want to use apple cider for these donuts but if you cannot get your hands on any, then yes, you can supplement apple juice. You will just need to boil it down to help amp up the apple flavor (I will discuss this below).

The perk to these being a baked apple cider donut recipe is that they are substantially healthier than any fried donut would be!

What do you need to make baked apple cider donuts?

How do you make these baked apple cider donuts?

How can I store these donuts?

These apple cider donuts are best eaten day of (and or the next day). If you want you can freeze them, but, I still suggest consuming within the first 48 hours of baking them.

Looking for something similar? 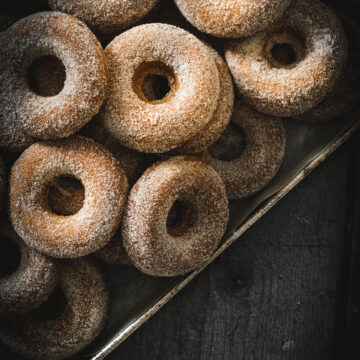 Hi, I'm Laura! Welcome to Sift. I help home bakers and cooks achieve impressive and delicious recipes. You and your guests will be asking, "are you sure this is gluten free".